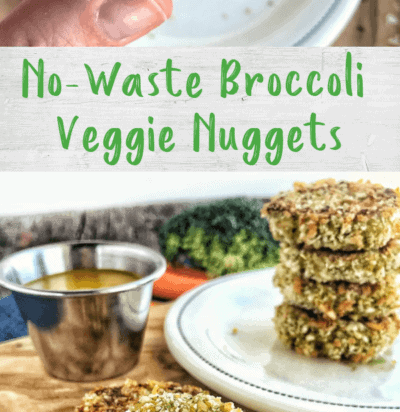 These bite-sized veggie nuggets are a simple way to get more veggies onto your child’s plate.

If you’re like me, I tend to cut broccoli as close to the florets as possible, so I don’t have to listen to my kids complain about the stalky part of the broccoli, which they don’t care for.

I hate to admit it, but I tend to toss that part of the broccoli away. However, in more recent times, I started freezing leftover veggie scraps to use at a later date in homemade broth.

Nutrition Tip: Just a half-cup serving of broccoli has as much vitamin C as half an orange! Broccoli has a bit of calcium and protein in it too.

So, which is healthier – the florets or the stalk?

Answer: Both! All parts are good for you. Broccoli contains vitamin C, potassium, B vitamins, along with calcium and iron, which are contained equally in both parts.

If you plan to use the whole stem on the broccoli, the outside layer should be peeled, removing the fibrous outside layer. Here’s how:

These veggie nuggets taste amazing, come together quickly, and make enough to freeze for later. Serve with your favorite dipping sauce!

Jodi Danen is a registered dietitian and mother of two elementary-aged budding chefs. She is the voice of Create Kids Club, a food and nutrition blog for parents who desire healthy family meals but are short on time. Her recipes are simple to prepare, have a short ingredient list, and focus on fresh foods. With her background in school nutrition, she is passionate about getting children in the kitchen cooking at young ages & believes this is key to forming healthy habits for life. 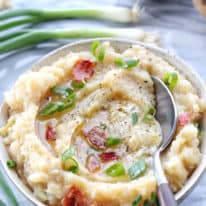